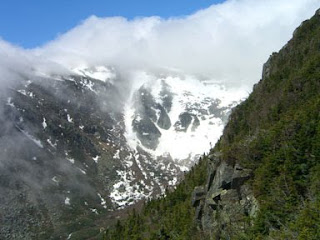 Sunday was one hectic day in my life and it all started with a terrible back sprain, and oops!! Wait, if I say back pain, it is not the one which comes near the hip, this sprain was in a virtually untouchable place, right in the middle of my left shoulder where you will have no access either thru your right hand or by your left and it was paining so badly that I could not even sneeze. I know I have a very long day to go and this sprain was a real dampener to my spirits. We all had plans to drive to a mountain peak which is the tallest in this part of the country and the day was bright and sunny which gave us a perfect sign for hiking. Our gang was all tired after doing this Whale watching, but still we do not want to miss a sunny Sunday so we gathered strength to go to this Mt. Washington Peak. The journey was a wonderful one and here is how it unfolded ...
We a gang of 5 left our hotel in our Ford Focus and I was the only appointed driver and also the one who had experience in driving in the US, I know it is close to 268 miles from where I stay and it was a solid 3 hours drive, we all started at around 7:30 in the morning and took the exact rout with the help of GPS, without a GPS you cannot drive in the US, that too an outsider like would find it extremely difficult, and it is not like India were you can park and ask some passerby, because there won't be any passerby in this country as everyone has a car. The drive to this mountain was nothing but scenic and we took some wonderful shots in my friend’s camera and every snap can be wallpaper on its own, this part of the US is extremely beautiful during this time of the year. When I was driving at 80 MPH and that's when I have to take an exit and merge into a freeway, where cars would be coming a 100 MPH, the thumb rule in this country is, when you are merging into a freeway from an exit, you have to lean forward towards your mirror and make sure that no one is crossing your lane and then merge, when I attempted to do that, there was a big scream in the car, oopss!! That was me and the reason was my sprain on the back, it literally paralyzed me and I was shitting bricks in my pant, as I don't know if this would lead to some major accident.

We all pulled over to a nearby restaurant to have our breakfast and that's when my cousin did some massaging to my back, but the pain refused to subside, unfortunately I am the only eligible driver who can drive here and hence I could not hand over the wheel to my other folks. There were pine and peach trees on both sides of the road and there were beautiful streams which were running across the country side of Walthom, NH and the colors of the leaves started to change to an orangish red, on the whole the whole drive was picture perfect. I was doing good speed on the highway and all of a sudden I saw this police officer who was standing there with a speed gun and all of a sudden I brought down my speed from 90 to 55 which was the permitted speed limit. I got up so early in the morning to go for this drive and hence I did not catch good sleep, when I was driving on a single lane highway, all of a sudden I heard this "wrrrrwrrrrrrrrrrrr" sound, and oh shittttttttttt, I was crossing the double yellow line and driving on the opposite side and you know the reason ?? I fell asleep over the wheel. The entire gang got worried that I am stressing myself beyond the limits, but nothing much they can do. I got out, refreshed myself with some stretching and then continued my drive.

We reached the base of the mountain around 11:00 AM and then we took our car to the peak. The drive to the peak was nothing but adventurous, the more the height you go, the less the visibility and it started to get overcast and visibility dropped to less than 1 meter, and then super thrilling thing is, if you miss your turn, probably you would be down under 6000 ft, the entire gang was worried, I would say scared, coz I had given them the scare of sleeping over the wheel and if I do that this time, we all would be referred with a prefix of "Late" to our name. The folks put Ilayaraja songs to motivate me and keep me awake, they were chatting non-stop within themselves so that I am not sleeping, but I know I have a great responsibility on my hand, so I concentrated 200% on the roads and drove with utmost care, the visibility went to almost zero when we were just 2 miles away from the summit. My eyes started to burn and it started to drip but I never lost my focus. It was dead cold outside and around 11:30 we reached the summit which was at 6842 meters above sea level. On a bright sunny day (it never happens) we could see Canada from that peak is what the claim is.

We spent a good solid 1 hour on the summit, enjoyed every bit of that cold and chill winds, in fact we were inside the clouds and the feeling of those chill clouds touch your face and go was something beyond words for me to explain, you have to feel that to believe that, it was literally heaven up there, but unfortunately you cannot stand outside for more than 20 mins, as you would freeze to death. We all had a hot cup of tomato soup after that, which was like "Yummmmm!!!!!!!!" to all of us. The ascent ride was even more dangerous, if the grip on your car was not ok, you would probably hit the floor very soon. We have to keep our legs on the brakes constantly and that in turn would result in heating the brake plates and chances of them failing would be very high, so every 1 mile, you have to pull your car to the tip of the mountain and cool your brakes, but don’t dare to look down, as you may faint and fall down. When we pulled over such a spot, we dared to look down and admire nature's beauty, but when you go to places like this, nature is rather scary than being beautiful. The scene was simply terrific, and the sight of those mountains from that height was awesome.

I carefully drove down to the base, we refilled our tank and then started our another long journey back to Boston where I have to drop my cousin and from there I have to head to Nashua, by 6:30 I reached home like a dead pig after driving 538 miles in a day which is approx 1000 plus kms in our country. But it is all worth it when I recollect those lovely scenic places I saw during my drive.