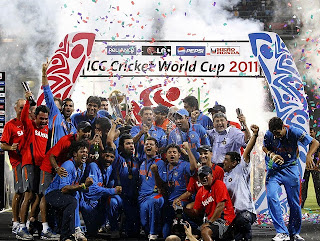 I know this post is a little too late and the reason why I delayed it was to relive the moment a little later.

The day which will be etched in my memory till my doom, is 2nd April 2011 and a verse which I want to be as an epitaph on my tomb is “Sachin kissed his World Cup”. In spite of me falling terribly sick that day, I gathered some strength to watch this epic final between India and Sri Lanka. I never expected INDIA to reach this stage, but some stupendous batting and fielding performance by the men-in-blue proved me wrong. I am gonna take you all through the emotions and highlights of this Cricket World Cup 2011.

The way Sehwag started this World Cup was in itself a very special and a memorable one, starting the series with a sexy cover drive and continuing to start his innings with a 4 on 5 consecutive innings is something special. India looked very strong against the minnows Bangladesh in the opening match and that performance could have given shivers in the spine of every other nation who played in the same group, but their inability to contain a score of 338 against England and their famous collapse of 9 wickets in 29 runs against South Africa and their tendency to get out before 50 overs did not hold any weightage for their “favourites” tagline.

Pakistan, South Africa and Sri Lanka where literally threatening and their performances in the group stage did gave every cricket lover a mouth-watering contest for the semi-finals. My predictions for the last four were Pakistan, Sri Lanka, South Africa and Australia and till the QF stages begin, these four seem to be the strong contenders. When INDIA finished 3rd in the group and they were made to go head-on with the defending champions, I felt that is the end and INDIA is doomed, but the way they fielded and batted that day made them a better side and justified their slot in the semi-finals by beating Australia, though every cricket lover would want to watch a INDO-PAK encounter, but seeing it on the big stage such as a World Cup semi-final is a little too much for the weak hearted.

Pakistan continued their dominance in the QF by trashing WI by 10 wickets and they were ready to face their arch-rivals INDIA. Though we all knew that INDIA has a strong batting line-up, we very well know that Pakistan is having fierce bowling attack which is superior to any of the other participating teams. Luck fortunes the brave and that is what we all witnessed that day when Sachin Tendulkar was dropped 4 times and a very close LBW appeal was deferred due by the UDRS, and followed by a next ball stumping, which too gone in favour of Sachin, though we were sad that he could not go for his 100th 100, we are happy to see him hit 85 and Umar Gul bowling one of his worst spell of this World Cup. Indian bowlers did not make it a nail biting encounter, as they took wickets at regular intervals. At the end, INDIA were through to the FINALS

The D day finally arrived so as a bloody viral fever and vomiting for self. I know I cannot miss this match, so gathered some strength to watch the match at 2:30, I was singing the national anthem along with the team and other 1 billion INDIANS. My memory took me back to 2003 where I was doing the same thing and finally INDIA was trashed mercilessly by the Aussies, but today it’s a different venue, a different opponent. The toss in itself had its own slice of excitement and for the first time in the history of CRICKET the coin was flipped twice in the same match. Initial reactions portrayed Sangakkara as a cheater and finally it became clear that the match referee could not here Sanga’s call due to high decibel that prevailed in the stadium. When the entire nation expected R Ashwin to be in the side, Dhoni broke a billion hearts by including the useless Sreesanth.

India lost the toss which I thought to be a bad omen as the pitch report says that the team batting first will have the advantage. Sri Lanka did not have a dream start, as Zaheer was bowling a superb line, and this was quite opposite to the spell he bowled against the Aussies in 2003 finals where his 1st over went for 19 runs. Upul Tharanga who seem to have had a dream run in the competition fell cheaply without disturbing the scoreboard much. Dilshan and Sangakkara played a decent partnership before Harbajan removed Dilshan with a “not-a-wicket-taking” delivery. India’s fielding came good that day and Suresh Raina alone could have saved 30 plus runs. Sri Lanka dropped the inform Mendis and brought in 4 changes to the final 11, which in turn is a big surprise. At the end of 50 overs Sri Lanka posted a mammoth 274, which is not an easy score to chase, that too in a World Cup FINAL match.

India could not have imagined for such a disastrous start as Mallina removed Shewag the very second ball of the innings for a nought. The whole of Wankhede went silent, but their HOPE always rested on the shoulders of Sachin, so they were happy to see him at the crease, when Sachin played two stunning cover drives of Mallinga, the crowd went mad, but the madness was soon cut short by Mallinga by removing the “son of the land” Sachin, Sachin chases a delivery which was shaping away from his body, but could only manage to get a nick and Sangakkara took a low catch, and the moment he took it, the felt as if he has laid one of his hand on the trophy. You could have clearly heard a pin drop at that moment, the Sri Lankan’s celebrations were quite audible and the crowd just could not believe what had just happened.

The team’s main motto for participating in this world cup echoed loud and clear, and the question in everyone’s mind was “Can they win this Cup for Sachin?” Virat Kholi and Gautham Ghambir played a sensible innings and built a partnership of 83 runs, though this does not warranty a win, it at least ensured that INDIA will not be bowled out cheaply. When Virat was out by a stunning return catch by Dilshan, there walked in the captain, not only with the pressure to win the FINALS, but also with the pressure of him not performing well throughout the series. The moment he walked in, he seemed to be a very determined player, his intent was very clear that he is not there to block the balls and allow the run-rate to climb. He punished even the good deliveries and running between the wickets was top-notch. Dhoni and Ghambir added a valuable 109 runs and by this time, the Sri Lankan’s body language showed that they were running out of steam.

Ghambir’s dismissal did not trigger any panic in the side, as INDIA were well placed and had a higher edge than the Sri Lankan’s. Dhoni and Yuvi added a 54 runs partnership in which Dhoni scored the most of the runs. With 4 runs to win, Dhoni was facing Kulasekara, and the bowler bowled a full length juicy half-volley which Dhoni gleefully accepted and belted it over the Long-Off for a wonderful six and also etched his name in the history of Cricket by claiming the most coveted trophy of this game. Wankhede Stadium is the place to be in on earth that time and the celebrations that happened after the victory is beyond words for me to write. I blew one of the loudest and the longest whistle of my life after INDIA’s victory, I was screaming and running like a mad cow inside my house, just to leave my wife to close her ears with her hands.

It was heartening to see every INDIAN player crying and more than that I was happy to see Sachin smiling, he has at last full-filled his dream by kissing the World Cup. He had to wait for 21 years to achieve that feat. INDIA had to face 3 tough opponents to lift the trophy and for the way they beat Pakistan, Australia and Sri Lanka, INDIA truly deserved the cup. Along with the billion fans, I too wanted to celebrate all through the night, but my health did not allow me to do so, but the moment Sachin grabbed the World Cup and the champagne bottles sprayed all over, I felt as if the meaning to my birth was full filled. With loads of joy in my heart and a loads of vomit inside my tummy and with utter dis-belief I went to bed. Here are my favourite moments of INDIA’s performance in this 2011 CWC, in no specific order though.

1. Shewag’s 175 against Bangladesh
2. Harbajan’s blinder of a ball to remove Umar Akmal.
3. Yuvraj’s knock against the Aussies
4. Zaheer Khan’s wicket of Collingwood
5. Dhoni’s SIX to clinch the cup.