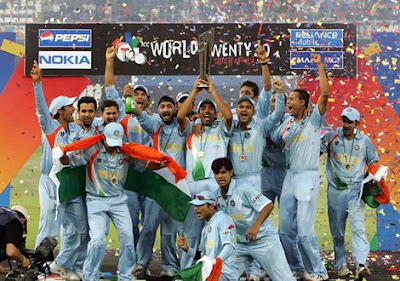 Its Raining Sixes in Durban ...

Yeah, i am back to blogging after a long time, hectic work forced me to distance myself from blogging, but that is something which i volunteered myself. Ah, there were many interesting things that happen in this gap and the one important thing is the Twenty20 Cricket World Cup which kicked off on the 11th of September 2007 in South Africa. 16 cricketing nations have taken place in this competition and INDIA being the least favourite team in the competition have really done well and are now into the SEMI's and meeting the world champions.
There was one match between INDIA and England where in Yuvraj Singh blasted the impossible 6 sixers in an over and i was so fortunate to watch that live and it was simply mindblowing. For those you have missed out, check out this video
at September 21, 2007 No comments:

Where else such bizzare things happen if not in INDIA, here is a very interesting news which i came across quite recently.
Here is the latest in the corporatisation of crime. An agreement on STAMP PAPER is duely signed by the KIDNAPPERS and the victim's family saying that the victim's family will not go to the cops after the release of the KIDNAPPED individual even if the same person is KIDNAPPED again !!!! This bizarre sequence of events dates back to August 19th 2007 when a 14 year old "Saddam" went missing from outside his house in Uttar Pradesh, after a frantic search in the neighbourhood, the boy's father went to the police to lodge a "Kidnapping" case. With their usual nonchalance, the cops told the desperate father to go hunt for the boy himself.
Left on his own devices, the victim's father made enquired but drew blank. Then on September 2nd, he was contacted by the kidnappers and they asked him to come to a remote village, the father begged the kidnappers to return his son, as he is his only "hope" for future, but the kidnappers were adament, but the father kept begging for mercy and finally he signed a BOND with the kidnappers on a stamp paper and got his son released.
Waittttt, the story does not end here, the interesting part comes now. We all have the habit of procuring a loan and then paying that money in easy monthly installments (EMI), what if the same option is given by the kidnappers for bringing back home our loved ones who are kidnapped ? Yes, kidnappers are now giving an option to the vicitm's family to pay the "Ransom" they have demanded in easy installments and its absolutely "Interest" free!!!! Sounds interesting ah? Well, no wonder if banks soon start allocating a scheme and issuing loans for "Kidnapping", but they do charge interest!!!!
at September 09, 2007 No comments:

Email ThisBlogThis!Share to TwitterShare to FacebookShare to Pinterest
Labels: Interesting

Hmm, after enjoying nearly 4 months of lovely home made food prepared by my grany and aunt, i am now pushed back to kitchen, yes i have left my grany and aunt at chennai and i came to bangalore on the 2nd of this month. Initially i was supposed to go to hyderabad for a training, and hence i dropped my grany and aunt back to chennai, but later that got cancelled due to the serial bomb blasts that happened at hyderabad.
It was very different for me to cook after a long time and luckily i did not forget my culinary skills. I am planning to cook more variety dishes and then keep myself busy during the weekends. I am now back to bachelor life and have to do all household activities on my own, but this is not a reason for me to get married :-)
I need to find out ways to keep myslef busy and kill my lonliness during the weekends!!!!
at September 05, 2007 No comments: