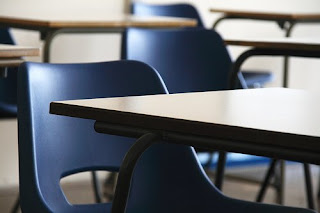 It’s time to share some of my examination hall humor in this post; and also to give an insight to my readers regarding how brilliant I was when it comes to studies. I am never a bright student in my academics, my dad actually had planned to send me to KARGIL as I always pass in border ;-)) (romba mokkaiyo ??), and every examination to me is a urine test, oh yaa, moment I see the question paper, my bladder gets filled up and there is a very interesting story that lies behind that and I will tell that at the end. This post will talk about the funniest incidents that happened during various phased of my academics, I can guarantee you folks a LOL experience after reading this. Well, my entire life is glued with humor and fun ...
I am proud to say that I was detained in my 6th std in one of the famous schools in mylapore, P.S Senior Secondary School and that is not because of I performed badly in a subject, it is purely because of the fight between my dad and that school's principal (Ms. Alamelu), due to the issue where the school refused to give answer papers to the students and the parents were called over a weekend to have a look at it, my dad who did not like this idea sent her a stinker letter thru me and that caused all the ripples, but later I continued to study there and I was allowed to move on to 7th std. The way I got admission in that school itself is a big comedy, I got first rank in the selection and that was the first and last time I got first rank in my history of schooling. I stole the pencil, rubber and sharpener of the next kid who wrote the exam with me and I told my dad that they gave me this as gift, this happened on the day entrance exam was conducted. I am still waiting to give that back to that unknown friend.

Next is 10th standard. Everyone in my family (incl me) were mentally prepared that I am going to fail, coz I was chucked out of the mathematics exam where I did not attempt even one single 10 marks question. Why did they send me out ??? Well, I was not an expert at that time to use bits and also I feared that I may forgot to take that bit out at the right time, so I had that bit right inside my geometry box and cross checked its presence every 10 minutes, when there was a news that a flying squad has come to our school, I was about to pee in my pants and in that fear, I asked my invigilator if I can keep my geometry box outside, invigilator was puzzled and she asked me, if you keep that box outside, how will you do your geometry sum's ? I did not answer to that question, but insisted that I need to keep that box outside and then will take it in after the squad leaves the campus, see how innocent I was, immediately that invigilator opened my box and took that bit out and told me - "You along with your geometry box can go out now ..." there goes the dreams of being a mathematician into the drain. But luck was on my side, without me attending any 10 marks question, I got 101 out of 200 and I cleared math’s exam. Still my dad used to pull my legs saying "We should have given that for revaluation"

Next is 12ts standard. The story is still the same but this time my family had a ray of hope that I may clear 12th, and it’s my mistake in setting that expectation as I passed 10th standard. This time again mathematics proved to be my devil and joining hands with chemistry, I was shitting bricks days before chemistry exam and there came god to my rescue, the question paper was leaked a day in advance and I mugged every damn thing and went there like a scholar in chemistry, I wrote that exam very well and came home with a sense of *pride*, just to hear the news of my world crashing on me, yeah, government of tamilnadu cancelled that exam and they said that will be re-conducted later. My cousin Sudha knows how much pressure she was in to teach me Calculus and Integration just hours before my math’s exam, she banged her head in all possible corners to teach me that subject, she was awake till 4:00 in the morning and taught me the basics which would help me clearing the exam.

Next day morning she asked me some questions and I don’t think I answered even one. Once again luck smiled at me and I was place next to the most brilliant student in my class, I thanked GOD and out of over-confidence and with some previous experience I had, I threw all the bits I had and was entirely dependent on Umamaheshewar. I was rehearsing how well I can copy, how should I sit, how should I "hiss" so that uma hears me and also giving him tips of how to keep his paper on the table so that it is visible to me, unfortunately all these rehearsals were closely watched by that school headmistress and she promptly moved me to the center row where I was the only person and all the 20 back benches’ are empty. Whatever Sudha taught me seem to have gone blank and with no bits in my hand I was sitting like a "Niraayudhapaani". My reynolds pen ran out of ink and whatever I wrote is not visible to my eyes as well, I thought I am gonna fail, but fortunately I got 88 out of 200 and came out with *flying colors*.

MCA - Discrete Mathematics & Statistical Methods - Man, even now I get nightmares as if I have not cleared that paper, I attempted 7 times in 7 years, yes, I did my MCA for 7 long years, and somehow managed to clear. Well, here comes the fun, we a gang of 6 who always fail in discrete mathematics, decided to get rid of that paper during one of our arrear attempts, we all have continuous registration numbers and we are aware of the seating arrangements at Pachayappa's College which was our exam center, we split the chapters amongst ourselves and each one of us should prepare bits for the allocated chapters and exchange it in the exam hall, we have a clue of what all could be the important questions, when you attempt a paper for 7 years, you are actually eligible to set the question paper for university. We *worked* day and night and prepared bits for all 15 mark questions and were confident in clearing that paper this time.

It was a hot summer morning we all assembled at the exam center and were teasing the other folks who were preparing hard for their 7th attempt, we all went into the hall and guess what ?? Surprise ... that day there was this M.A HISTORY exam conducted at the same center and our gang was scattered like atoms every corner of the room, what do you guys think would be the first reaction from our gang ? Shock ? Anger ? Frustration ?? naaaa, LAUGHTER, we 5 laughed out loud and that drew the attention of the invigilator and he asked - "Enna pa, romba easy yaa paper, ippadi sirikara", and I said "Idukkan vanungaal naguga, adhaan sir indha sirippu ku artham", and to add salt to our wounds, the questions were almost the same to the bits we prepared, but unfortunately we could not exchange our bits, but this time we were determined to clear that subject by some means, so we worked hard in the exam hall, all of us wrote close to 55 pages and finally decided to "CHASE" the paper and here we are MCA graduates.

Here comes the funniest incident ever. It was a rainy November season and I was appearing for my arrear exam "Computer Oriented Statistical Methods" exam, I was well prepared (seriously) and I saw the question paper and it was a cake walk to me, but this time nature played the villain’s role, my bladder was almost full and the outside rain and chill winds inside the class room made it impossible to hold, I requested my invigilator to allow me for a loo break, he being a "strict officer like shivaji" refused to allow me, before my nature call becomes a missed call I decided to walk out of the room, that "strict officer" said, "give the answer sheet and go and you are not allowed inside the class room again", Satish's future was hanging between a subject which he was confident of clearing and urine, finally nature prevailed, I decided to walk out and relieved myself and came home after 2 hours, so that my folks at home does not question me.

I always used to tell my friends that I did my bachelor's and master's degree in BITS, and everyone thinks that it is the BITS in Pilani ;-)). If you folks have any such interesting examination hall incidents, please post it on your blog, I would like Chan, Amrita, Shylu, The Rat, Chennai Girl and Manisha to do this, if they think they can do ...