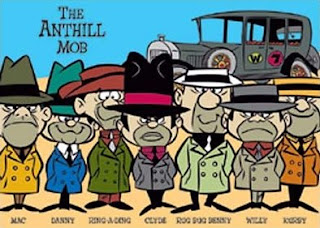 I was chatting with one of my college buddies today, he is in the US now and as expected he started to crib about that place and he said he wanted to come back blah blah blah ... but that chat took an interesting turn when the topic turned towards the golden days of our college where I was named as the most notorious of all and I would be there to bring out laughter in the class room quite often, he reminded me of few funny things which actually were my first trial experience in doing stand-up comedy in front of a crowd and those days I would say I am an amateurish performer and still I am ...

We a gang of 6 (decent) boys used to take bus number 1 from Mylapore to go to my college which was in Royapettah, and we have a friend who boards the bus at Thiruvanmiyur which is the starting point of that bus, and you won't believe he would reserve seats for us till mylapore, holding 5 seats till Mylapore and that too on a crowded route like 1 is not that easy, but he used to find novel ideas to reserve seats for us, but we being ruthless friends who play pranks left right and center amongst us decided to play one on that day. Once he managed to reserve 5 seats till Mylapore on a crowded monday morning, and already passengers were fuming that 5 seats were empty and still they have to come standing, and moreover they generally don't argue with a college going guy and that too from "New College" and moment the bus came to mylapore, we all decided not to board that bus where he has blocked the seats, that poor guy was screaming from inside and asking us to get in but we safely ignored his screams and showcased as if we don't know that guy and what happened next inside the bus was history, poor chap came to college with few swollen fingers and a sore left eye.

There was this wonderful subject in my bachelors degree and I simply loved and enjoyed every bit of it and me being a very curious person when it comes to electricity so it was quite natural that I was very attentive to that class, but not all days are sundays rite, there was one such class where I chose to ignore and continue my mimicry session at the last bench (yes I am a last bench student), and moreover the subject was "Transformers" which I am already very familiar with. I think the professor was in a very bad mood that day and he just could not tolerate the nuisance created by us and all of a sudden he asked me to stand up and asked me this question "Tell me the various losses of a transformer or else get out of my class immediately", though my heart wished to go out, but I just don't want to miss my friends and the fun we were having at that time, so I said "Copper Loss, Eddy Current Loss, Mechanical Loss and Stray Loss" the professor seem to be very impressed with this answer and he said "Very good, you remember the things which you studied in 12th standard" and not giving even a second for that reply, I said "What is the big thing sir, I still remember what I studied in LKG and started saying A B C D ..." and it took more than 15 mins for the entire classroom to stop laughing, including the professor.

This lovely instrument was the apple of my eye whenever I went inside our lab, not sure why, but I somewhat like that instrument a lot and above all, I like the prism they give us for experiment to find the "Interference and Diffraction of Light". We the gang of 6 hatched a plan to lift that entire instrument along with the prism one day, and mind you guys, it was a plan which is more complex than the plan laid for 9/11 attack. Each individual was given a specific role to play and my role was to divert the lab technician as folks thought that I am good at talking and making people laugh, one guys job is to un screw the spectrometer from the table where it was fixed and another guys job is monitor the main entrance so that no one is entering the lab and another guys job is to actually lift the instrument without making noise and another guy would be sitting under the table with a big bag, so that we can put that spectrometer in that bag. Roles and responsibilities were defined and it's the D day of execution and we chose Saturday to be the right time as there would be no issues and only the Lab technician would be available.

With the dreams of "owning" a spectrometer sparkling in my mind, our gang set out to execute that plan and we all know very well that if get caught, we are out of the college and that too taking a risk on the final year is something which makes me shiver when I think of that today. We all marched into the college lab and the plan was to go one by one and not all in one at a go, R was the first one to enter the lab and his duty is to signal to another R in our gang who owns the bag to come in and he should get under the table without anyone noticing him, it was more than 10 minutes R did not give any signal to us and we were worried whether R decided to take the complete plan on his own, so we asked R1 to go and see what is happening, R1 who went inside did not return for another 10 minutes and our gang really got worried, without knowing what has happened. B, S and A was so scared that they decided to withdraw from the plan and gave me advice to drop the whole idea. But somehow I convinced B, S and A to go into the lab and I will follow them.

As expected R was planning something other than the plan, I just went in at the right time and squashed his ideas, A was asked to get inside the table / cupboard so that no one sees him hiding, that cupboard is the place where all accessories would be stored, it is a pretty big one which can accommodate one or two persons easily. I approached the lab technician and asked him how his family and other things, just a casual chat, in the meantime S started to unscrew the spectrometer from the table, that is just a hand-tight screw, so it was easy to remove, another R was guarding the gate now and B carefully lifted the spectrometer, again don’t ask me "Why a spectrometer ??", it was all set, and I was monitoring both the lab technician and the guys, when it was all set, that bugger A screamed from inside the cupboard and unfortunately B had latched the cupboard from outside.

A's bloody scream attracted the LAB technician’s attention and he came running towards the table and he caught B red-handed with the Spectrometer in his hand, well all our final year dreams came crashing, the Lab technician first opened the cupboard to see A jumping out like a rabbit, and I was fuming, the lab attendant has no clue of what was happening there, out of all these chaos, we were all laughing out of the back because A was bitten by a bit RAT on one of his juicy bum, blood oozing out of that bitten portion and A in full tears, the lab attendant started to laugh along with us and there came my presence of mind for the rescue "Hey folks, let’s not beat A for the fact that he hide himself in the cupboard and it won't be fair for us to hit him with a spectrometer, S please keep it on the table da", then I have to cook a story to the attendant saying that we were all searching for A as he has to pay us some amount, and once we found him hiding here, we latched from outside blah blah blah ... and there ends my dream of "owning" a spectrometer and that too by a RAT, but the bite on A's butt was simply out of the world and every time we used to pull his legs by that incident, and we added spice to that incident by spreading that news across college and telling everyone that the RAT died immediately after biting A's back, as he has not washed it for a long time.

Well, we 6 are still in touch, but only via the electronic medium, though I had a chance to stay with them when I was in the US, but still our gang misses all the fun, and there is one plan which is still pending becoz of me and that is nothing but, we six should go to some lovely honeymoon destination with our partners and laugh out loud by sharing such incidents, well, I am the one who is yet to tie the knot, so folks are patiently waiting ... time will answer this question guys ... just wait :)