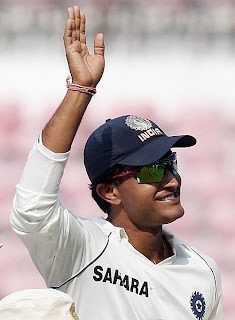 Sourav Ganguly, the man who made the entire world to look towards INDIA in the world of cricket due to his skilful captaincy. He was one of the greatest left hand batsmen INDIA has ever produced. He is extremely stylish and his cover drives are a treat to watch. He has this immaculate skill of driving through the off, even when it’s packed with 7 fielders. People, who have cribbed about him, should think of all those good days he had and all the entertainment he has given to this nation of billion fans.
He is one of the most successful captain India has ever produced, to me I would rate him the best amongst all the other captains of India. His aggressiveness on the field was tremendous when he was at his peak. Yes we all know that he has spoiled his name on his own due to some unwanted comments and statements he made while he was captaining the side, and there was a drift within the team and that was evident on the recently concluded World Cup 2007. I could not agree rating ganguly's caliber based on his off field performances, when he was at his peak he was a terror to the bowlers. Remember guys, he and sachin are the best opening pair India has ever had....
The way he hits SIX by coming down the crease and lofting it over the spinners head, is something we cannot explain in words that has to be felt. He dances down the pitch and then gives a neat whack at the ball, to the best of my knowledge; I could not remember Ganguly missing those lofted shots and got caught in the outfield. He has several great knocks to pat his back on, one particular thing being the partnership he had between Dravid for 364 runs at Old Trafford against Srilanka during 1999 world cup. He has that famous "shirt removing" incident which he did to give it back to what Flintoff did for us when England played against us in India.
He rubbed shoulders with the then coach Greg Chappel and what happened after that is a world known history. I feel bad that India will miss such an exciting, stylish left hand player in the coming games, and if he wouldn’t have got caught in those political storms, he would have been a great cricketer like Sachin. I am surely going to miss watching his batting and whatever that is being said, to me is one of INDIA's finest cricketing legend. May Sourav get his time to spend with his family and wish I him all the best in whatever he does in future. I hope we can see him in action during the IPL.