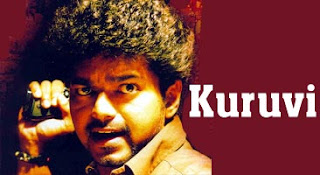 I know its a pretty late review to read, but unfortunately I got a chance to see this movie just today and I could not resist writing review for this movie, ok let me not keep you guys in the dark, I am talking about this movie "KURUVI". At times, these kinds of movies really make us go spiritual and religious, and give us an opportunity to believe, GOD does exist and he is the ultimate savior of this mankind. I am still wondering why they have spoilt the name of such an active bird which is almost near the verge of extinct...
We actually should not crib much about the movie, as the director has given ample clue of how the movie will look like at the very start of the movie, I am telling about Vijay's introductory scene, where he comes from a drainage, what that actually indicates to us is, that movie's story is taken from the drainage and all you can expect is shit. There were too many built-up's in the movie which was totally unacceptable to believe when it is performed by / for Vijay. The fight sequence which is happening at a pub in Malaysia is totally out of this world. Imagine a guy who is a bit fatter than "Kaaraa sev" is hitting people who are of the size of "HULK" and they are all flying and getting severely hit, I know its just animation, but to me, any technology should be used in a proper sense, and it should not be misused. In this movie it is actually misused.
Dharani has taken for granted that the audiences are total idiots and stupid’s and they have no brains. If he wouldn’t have thought so, he would not have kept scenes like, Vijay escaping bullets just like the way we keep ourselves away from any flying bee of fly, Why the hell there should be a power cut for 10 seconds that too during new year?, Replacing diamond with hard sugar was the top of the comedies, and that too if you notice, he replaced a hard sugar which is of similar size and shape as that of the diamond. Vijay has tried hard to show is six pack, he thought of gaining "Wowws" from the female audience by showing off his "muscles", but unfortunately he gained "sympathy" and I advice him to eat properly and then put on some muscles in the first place to show it off. In the climax when he removes off his shirt, and stretches his arms to show off those two lemon sized "biceps" he actually resembled me ;-)
Trisha herself does not know what she was doing in that movie apart from 2 duets. In one of the scene she appears to come out of the bathroom with just a towel, I actually mistook that to be a continuation of the "that" movie clip of Trisha which created ripples among youngsters like us ;-). Vivek on the other hand is losing his popularity by acting in such useless movies where he does "tragedy" in the name of "comedy", its high time he takes a break and thinks of some humorous script on his own. He is a talented kid and we both have worked together in humor club, and I know his potential. Vijay should also concentrate in acting on some first hand movies rather acting on remakes. But please, for heaven sake, do not remove off your shirt even if it’s a bathing scene.
There were too many baseless and unanswerable scenes in the movie, for example when sudhakar locks himself inside the lift and then cuts the lift wire, where on earth Vijay got immersed inside a deep pool of water? Do we construct lifts above pools? The second most atrocious sequence was that opening "car race", where on this earth, these directors get such stupid ideas; Vijay winning the race by just biting the accelerator cable and all are out of this world nonsense. If he thinks that is the only way to show off the heroism, GOD save tamil film industry from Dharani. The villain, who has acted so well in Shivaji, has been wasted by the director, he getting paralyzed after being hit by "kaaraa sev" hero, is something too much. There was actually a computer miracle in this movie, Vijay sends emails for the villain’s laptop which is neither connected to the internet, nor it has a data card, I think CISCO, Honeywell, Google, Microsoft and other top companies need to talk to Dharani and find out the logic behind that.
I have a humble request to Dharani, god sake, please don’t direct such movies and even more humble request to Udhayanidhi Maran, Please don’t fund such useless directors, If someone says you have produced a marvel in the movie "KURUVI", spot enemies in them. If I need to end this review in a typical SUN TV, Top 10 Movies style (The guy who presents this will sit still as if he has got paralytic attack, by clasping his legs till the end of the program), I would say, KURUVI - KODUMAI.