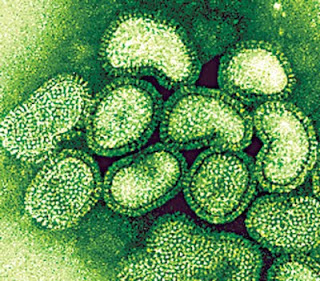 Well ... Well ... Well the entire globe is now shivering with fear and people fear to even breadth, the new one of its kind virus is called the H1 N1 virus or otherwise known as "Swine Flu", what started as a pandemic in countries like Indonesia and Thailand and as usually India did not bother much about it until it was affected seriously. Now it’s time to take some reactive measures and try to protect ourselves from that deadly virus. I am sure by now you folks would have got 100s of emails which would have given you 1000 different ways to protect you from that virus and hence I am not going to bore you all with that same thing. We are now going to see the funnier side of H1 N1 and what tamasha it has brought into our country. As a word of caution, I would like to say that the incidents mentioned here are fictional and if it happens to match a real life character, it is mere coincidence...
It all started with a campaign stating that we should protect our hands and keep it clean all the time and our office being so careful in all these things, they downloaded a huge truck of sanitizers and installed it in every corner of our office and it carried a beautiful sign saying "Wash your hands to be fine and say good bye to Swine". There were automatic dispensers of those hand sanitizers everywhere and without even knowing what it is people started to use that and I happened to come across a very serious character who spoke to me with a sense of bother that India should not have allowed H1 N1 to spread like this, we should have taken precautionary measures blah blah blah and all these were happening in our office rest room, suddenly our health cautious man pressed really hard on those "hand-sanitizers" (which was written bold in text) and filled it till the brim of his concaved palm and started washing his face, and while washing he gave me one more shocking comment saying "This face wash is not as good as dettol Satish". So here we come across the first educated fool who is trying to create awareness about H1 N1.

There were automatic hand sanitizing dispenser's every 200 meters and one fine afternoon there was a bigggg queue across all dispenser's and people were waiting to get their "hand" sanitized, I being a person who likes to observe people, I started looking at one fellow who was the most restless in that queue, he was constantly watching his watch and making calls in his cell phone saying "Ya ya ... I will be there in two minutes, you initiate the call ..." and he tend to be more restless as time goes, I went near him to check if he is having any other mental disease other than H1 N1 and asked him "What's up", and he gave me a very innocent reply saying "See yaar, I gotta go for a call, but there is a bloody queue for this hand sanitizers, not sure what to do ...but I have to wait", that idiot thinks that it is a mandatory stuff to sanitize his hand just because the office management has installed sanitizers, he has no clue of why he is doing that and he is the second educated fool who is trying to spread awareness on H1 N1

Wearing a mask has actually become a fashion statement now. I saw a girl who was wearing a beautiful mask which actually had an embroidery work of a flower. School going kids are the ones who enjoy this whole H1 N1 saga, if they have not done the homework, all they need to do is to cough and sneeze in front of the class teacher and the next 15th minute you are at home and as a result of that the entire class gets a day off. Awareness is absolutely zero in this whole issue, and thanks to media who added more panic than awareness to this society, lots of people are blindly following such false emails and then act really funny. One of my malayalee colleagues who always has the passion to go to the US has completely changed his mind and decided to work only from India, and the reason for that is, someone told him it seems, to go to US you need H1 and this fellow mistook that H1 with the Swine flu and changed his mind.

In chat’s people who generally ask "Hope you are doing fine" have now started ask "Hope you are not doing Swine". I would still say that his disease is nothing but an extension of SARs and the symptoms are quite similar to that and that too would lead to the death of the person if not diagnosed properly. It's a general flu and just because the media has hyped about this disease so much, instead of creating awareness, it has created fear and panic amongst the affected patients. I would say any disease would prove deadly if not diagnosed or properly treated, even a common cold can kill a person, it all depends on our body's immune system and our body knows how to react and how to protect itself from such diseases, and we call it as resistance in simple terms. We claiming ourselves educated people, just start thinking this in a much holistic way and spread the news to our fellow educated fools, let’s not blindly follow the crowd and we will be heading nowhere.

All that being said and done, my heart goes for the family of the victims who have lost their dear ones to this virus and I would say this as most unfortunate. Maintaining the eco balance of this planet is unfortunately not with us, and it is with him who sits above us and making all of us dance to his tunes.