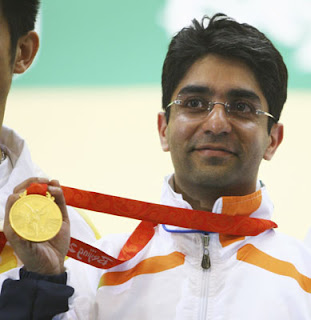 It’s GOLD at last. The shame of the entire nation for not getting an individual GOLD medal at the Olympics came to an end after nearly 88 years. This is the first time an INDIAN had won gold and it’s certainly a remarkable feat. Let stop worshipping sachin's and dravid's and ganguly's for one time, here we have a true hero who has really made the nation proud. He came from no where and conquered the world. I just happened to see the recorded version of that shooting sport and I was jumping in JOY after Abhinav Bindra hit the last bullet right on the bull’s eye ...
Bindra was fourth after qualifying but had a brilliant final round and even hit a near perfect 10.8 on his last visit to pull in front of Henri Hakkinen of Finland, who dropped to bronze with a poor final shot of 9.7. That allowed China's Zhu Qinan, the defending Olympic champion and heavy favourite, to pass him on his final shot and win the silver medal. "It's just great," Bindra said just before climbing on to the podium. There were no false tears, no hungama, Bindra was a package of composure. He stood silent and just bowed his head to receive the medal. I would say, he just did not get the wine flow into his head.
His speech after wining the medal was so humble and he showed no signs of excitement, he added that "it was his day" and on a given day anybody could have won the gold, how humble one can be. He has not only made the entire nation proud by winning gold, but at the same time, he has made the entire nation to turn towards a game called "shooting", which to date was referred as something that deals with "cinema's", what to do our people or so negligently innocent. Hats off to that young man and our entire nation salute his achievement.
On the other hand just our one and only "media-hyped" tennis player "Sania Mirsa" has bowed out of the singles tournament owing to some injury, actually it does not make a big difference, anyways she would have comfortable lost in that match to that un-seeded chezh player after the score read "1-6" in the first set, it was all Sania's cooked up drama and she acted as if she is withdrawing from the tournament due to injury, and what she failed to read is, INDIAN's are not that stupid to believe that. Well, she is one non-sense sports women of our country who has been badly pampered by the media.
Anyways, INDIA's flood gates to capture more GOLD’s have been opened, and it's up to the other personalities to climb the podium and make all of us proud. Chak de India!!!