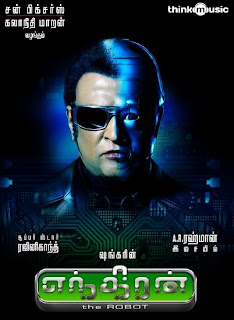 I am back after a prolonged period of Hibernation and the man who woke me up from this hibernation is none other than our one and only super star Rajnikanth. I may be very late in posting this review, but what to do, I watched ENDHIRAN only this Saturday. I just cannot wait to blog about this and express my outburst of happiness and awe after watching this movie.

This movie had got every ingredient to make it a grand success, Rajnikanth, Shankar, and A R Rehman, what else you need? This is the combination which is assured of entertainment and failure is a term which never exists in the dictionary of this trio, and this in itself is a huge pressure to start with. These are the folks who constantly raise the bar for their own success and make sure they cross the new benchmark that they have set every time they perform and yes, this time too, the trio has spelt magic on the screen. Shankar has once again lived up to the expectation of robbing the producer whenever he directs a movie, the sets and graphics in this movie is beyond the imagination of any producer and this would be the high-water mark for graphics in Tamil cinema for a long long time.
Aishwarya Rai has maintained the theory that she can NEVER act and she is just a beauty doll, well if I have to be a bit more honest here, she is losing the sheen as beauty queen and the natural phenomenon of aging has kicked in, if not for the advancement in the field of make-up, Aish would have been out of the race 5 years back. I should admit that she really has worked a lot to keep up her shape and figure, which is absolutely top-notch. One more movie added to her list of "i-have-no-role-to-play", she just comes as a doll and goes as a doll. The comedy track in this movie would be ranked as one of the WORST comedy track, Rajnikanth movie has ever had, Santhanam and Karunas have tried their level best to screw the movie and thank god it’s a Rajini movie and hence their attempted failed mercilessly. ARR has done a good job in re-recording and background scores, but the songs were not that appealing except "Arivaa Arivaa" song.
Rajnikanth has grown mountains when it comes to his acting skills, he was always known to be a crowd puller and never a great performer unlike Kamal Hassan, but since Baasha, he has worked a lot on his acting skills and his performances in "Shivaji" and "Endhiran" has taken him to a very different class, still he is one row behind the jhambavaans "Shivaji Ganesan" and "Kamal Hassan". The man is seriously a crowd puller and that is one thing which "Shivaji Ganesan" and "Kamal Hassan" can never catch up. This movie is more than a treat for all Rajini fans like me, we get pumped up just by seeing ONE Rajnikanth in the movie, but seeing 1000s of Rajinkanth's in one screen is just more than bliss, thanks to graphics and Shankar for making this happen.
I personally feel sorry for the Tamil film industry that, they have lost one of the BEST VILLAINS the movie industry can ever produce, this man has been terribly wasted as a HERO, though he has done justice in every movie he has acted, but if he would have been a VILLAIN, he would have won more accolades than what he has got till now in his career. We have been grown-up watching Rajnikanth as a VILLAIN, right from "Moondru Mudichu" to "Padhinaaru Vayadhinile" to "Netrikan", where this genius have made millions and millions of folks to have cursed him with his sheer performance as a VILLIAN in those movies, he would have been one of the most likable VILLAIN and one VILLAIN the audience always wanted to win against the hero, yes that is the power of Rajnikanth.
The scene which really floored me was the scene where he finds the real human amidst of other robots, when he found the real human, the way he says "mmmaaaaaaa" like a sheep was just fantabulous and it am not sure how long I would have whistled for that, man, I love the VILLAIN Rajini than the HERO. He modulates his voice so very well when he acts as a villain and still he makes us love him, he is certainly not a villain the audience wanted to hate. The story on the whole may be lacking "sense", but it is wishful thinking for the future and a very good entertainment for the present. As always, every Rajini movie can only be done by Rajini and no actor can even dream of playing that role, and this movie is not exception to that theory.
At the age of 61, I am stunned to see the energy and enthusiasm this man has and the way in which he has maintained his physic and health is something all youngsters should learn and follow. Rajnikanth is an enigma and he has proved it once again, and every movie he releases is taking him few thousand miles ahead of his so called competitors who wanted to sit on that "SUPER STAR" throne, one thing we all know is, that throne is going to be empty forever, and no one can sit on that throne and we will not accept anyone other than Rajnikanth to occupy that.
Rajnikanth is one person who does not need a story or a banner to entertain the audience, his sheer screen presence would make the land of billions to scream out of joy. People cry, laugh, pray, kiss, dance, jump when this man is on the screen, and once again it leaves all of us with that million dollar question, what magnetism does this man have, which attracts us towards him? He is one soul who is beyond caste and creed, he is one man who actually unites this nation, he is one man who gets straight into the heart and stays there forever. So for the folks who have not seen the movie yet, all I wanted to say is "Endhiri .... RUN ... and watch ENDHIRAN"
I would give a straight 10 out of 10 for this magical movie. Thanks Shankar, ARR and SUPER STAR for this wonderful treat.