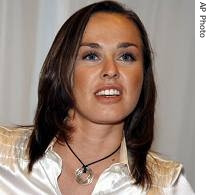 Its a real bad day for tennis as it has lost one of its champion player and we will never have a chance to see her playing again on any chanpionships. There once came a storm by name Martina Hingis which took every one by surprise. When Steffi Graf and Monical Seles were ruling both the clay and grass courts, this beauty came as a flash and then proved a real threat to those greats. Her first match was against World No 1. Steffi Graf, even though she lost the match, she gave a very tough fight to Steffi. It was all success afterwards as she played some aggressive tennis

I have not seen many women tennis players playing attcking tennis as most of them prefer playing base line tennis, but this little swiss beauty mastered the art of playing close to the nets and then attack the opponent from the word GO. Who could ever forget her French Open finals 1997 when she played against Monica Seles, she came back very strongly to win the title after she had lost the first set (0 - 1) and the second set was almost lost (1 -4), that was one match which will never fade from my memory. She got accolades from all of her counterparts not only for the talent she had on the court, but also off the court she is a wonderful personality. Her style of playing the sport with a sprit is something this younger generation should learn. During one of her match against an unseeded player, Martina actually played a cross court shot which the umpire failed to notice, but she was so down to earth that she refused that point and gave it to the opponent, and eventually she lost that game because of that.

She was often visited by injuries but that did not stop her from making a comeback to the circuit and go on winning two more grand slam titles under her belt. Its so unfortunate that she is making an un-graceful exit after she being suspected for doping in one of her wimbledon match. I strongly feel that WTA should not humiliate such a great player and they should have done this within closed doors and should'nt have brought this to the media, i am sure Martina is innocent. It was great that i am fortunate to watch this genius playing one of her match live in the US, its a dream come true for me. Good Bye you beauty, TENNIS will surely miss you.