NDTV's Entertainer of the year ... 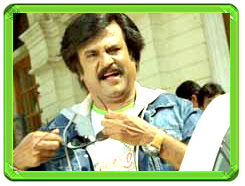 I am sure everyone would have known by now, yes our one and only SUPERSTAR Mr. Rajinikanth has been chosen as the NDTV Best Entertainer of the year by a poll conducted by NDTV. The votes were casted by NDTV viewers all across the country. This award was given yesterday at ceremony held at New Delhi and our hero was there with his usual costume of a neat white kurtha and a face full of white beard, i was so fortunate to watch this program live yesterday and here i narrate what has happened during the felicitation.

The nominees for this award was announced namely Sharukh Khan, Shilpa Shetty, Rajinikanth, Himesh Reshmiya and Karan Johar and our honorable Prime Minister Mr. Manmohan Singh was asked to unveil the winner, and as everyone expected the award went to our Super hero Mr. Rajinikanth. There are some points to be noted in this, prior to giving this award the previous awards were distributed by chota politicians like Mani Shanker Iyer, P Chidambaram etc etc, but for giving award to our Superstar our PM was asked to do, and next thing is, before this award, when the winner was announced and he or she could come up and stage and collect the award, there was only a big round of applause being given, but when our Superstar's name was announced and while he walked to the podium to recieve that award, the entire auditorium gave him a standing ovation, even the people who were sitting on the dias stood up and then gave our hero the due respect.

Rajinikanth was questioned by the host of what is the secret of his succuss ? Rajini gave his usual smile as a reply, later he was questioned by Sharukh Khan and Karan Johar, happiness was quite evident on their faces in just seeing this demi GOD of Indian Cinema, Sharukh quoted saying that "Its a great honour and a pleasure to have him here and its been an exciting experience for him to see Rajini live" he also added that he did not knew that Rajini would be here and if he would have known that before, he would have brought his son to this function, as he is a great fan of Rajini and he has already watched his movie Shivaji for more than 50 times and started practicing his style.

Rajini was asked who he considers as the baadsha of Bollywood and the answer was instantenous by saying "Amitab Bachan" and there was a thunder of applause in the auditorium. Our P Chidambaram said that he always admires Rajini's simplicity inspite of his fame and popularity he has around the world.

Superstar is always a SUPERSTAR and he will always remain to be a king in all our hearts. Long live that great legend. Thanks for NDTV in organizing such a wonderful function.