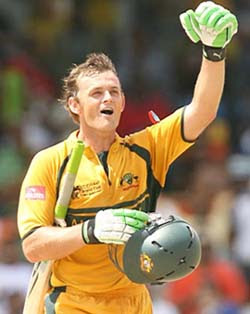 The one and only "Gentlemen" of Australian cricket will never be seen in action again on field, we will surely miss that great guys game forever. His announcement of retirement came as a real shocker to the cricketing fretenity as none of us expected that to come this soon. I dont think we can ever see such a terrific wicket-keeper batsmen in this era and its a sheer shame that our "Milkman" dhoni is called as "India's" Gilchrist.
Apart from his cricketing skills the world also knows his sportsmen sprit, he is one of the very very few players in international cricket who never waits for umpire's decision if he feels he is out and also if an opponent player scores a century or reaches a milestone, he will be the first player to congratulate him during the game itself. We saw that quite recently when Gilli went to Kumble and congratulated him for his 600 wickets in test cricket. Gilchrist has always been a sensational player, let it be his wicket-keeping or batting, he always brings in some amount of excitement to the viewers.
In a brief press conference after his retirement, Gilli said "It is with great pride and happiness that I make the decision to retire from Test and one-day cricket," "I've come to this decision after much thought and discussion with those most important to me. "My family and I have been fortunate to have had an amazing journey full of rich experiences throughout my career and are sincerely grateful to all who have helped make this stage of our lives so fulfilling."
Record-breaking Australia wicketkeeper Adam Gilchrist unexpectedly announced that he will retire from international cricket, ending a remarkable career.The popular 36-year-old told his teammates before the third day's play in the fourth Test against India, and his retirement, effective at the end of the upcoming triangular one-day series, was announced at the end of play. Gilchrist said he was looking forward to spending more time with his wife, Mel, and children Harrison, Annie and Archie.
Gilchrist departs the game as one of its greatest ever players after revolutionising the role of wicketkeeper-batsmen. A veteran of 96 Tests since debuting in 1999 against Pakistan in Brisbane, his 414 dismissals (377 catches, 37 stumpings) is a world record.
He went into his final Test averaging 47.89 with the bat, with 5,556 runs, 17 centuries and a top score of 204 not out. Gilchrist scored the second-fastest century in Test cricket history (57 balls).He also captained Australia in six Tests for four wins, including in the historic away series win over India in 2004.
Gilchrist made his one-day international debut in 1996 and has played 277 limited overs internationals, mainly as an opener, for 9297 runs at 36.03 with a strikerate of 96, 15 centuries and a highest score of 172, as well as 454 dismissals. He played in three World Cup triumphs, including belting an extraordinary 149 from 104 balls in last year's World Cup final against INDIA.
I wish this great person a very happy and a successful future ahead of him. I salute this great player and he will turly be my best wicket-keeper batsmen forever. Good Luck Gilli and thanks a ton for entertaining the entire world.