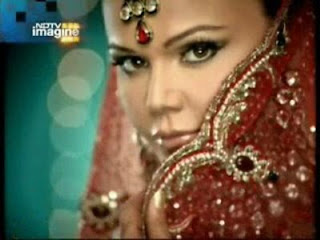 I don’t know how many people know about this, there is this program called "Rakhi's Suyamvar" that is being aired on one of the hindi channels and this is considered to be the heights of reality shows. Rakhi herself in my opinion is a crazy peer shaped nut and she is off to choose her life partner at the end of this show, and the best part is, Rakhi's brother is the co host in that show and he is the one who interviews all those probable candidates (what a family???). I am flabbergasted by the way these channels invent such stupid ideas to increase their TRP ratings and this one surely tops the list...

We all know that these channels will even enter our bedroom and feast on that if we say OK, but where on earth those participants come from ?? I am seriously lost to digest the fact that the so called bridegroom's who are all educated and who are all coming from a well off family, why the hell they have to go so cheap ? The way those guys behave and beg is beyond words to explain, and occasionally those crocodile tears shed by Rakhi is focused and zoomed and freezed on our TV screens and there is this thin air of "suspense" when Rakhi decides whether that fellow is eligible for the next round or not, man, all these are bullshit and stupid. The funny stunts that the bridegrooms do to make Rakhi laugh is the most cruel part of that reality show, the dignity and pride that every individual should have on themselves is lost forever.

Then comes the interview part by her brother, he intended to ask some silly questions to those guys to read their mind eventually spoiled and damaged the character of his sister, some of his questions where like this and this is the part where I was ROTFL.

Bro: Are you ok in marrying an item girl, who dances on the TV half naked ? (What a brother ...)

Guy: Yes Ji, I don't mind, my heart on soul is for Rakhi, and she is just doing her profession ...

Bro: Don't you think that people will say that an actress would have slept with many people, and how will you deal that ? (This was the best question, I don't know if he intended to say the truth here ...)

Guy: That is all nonsense. Even I am travelling across to the GLOBE for my business, even people can say the same thing about me. (I think accidently he let the cat out of the bag)

Bro: After marriage if Rakhi kisses someone or she acts in a rape scene, will you object ? (I seriously doubt if he is her real brother)

Like this every bridegroom is called in and her *brother* is asking such brilliant questions, one guy was very emotional, not sure why, probably he would have thought that he shouldn’t have participated in this show, bugger was on tears most of the time, may be the producer and director of this reality show wanted to give a "mega serial" touch to this and hence they wanted someone to cry all the time. During the course of this long reality show, Rakhi will be visiting all the families of those bridegrooms and then understand their lifestyle and she will be interacting with his friends to know more about him and all those tamasha will happen it seems, I am afraid this may be a trendsetter of its kind and put bachelors like me in soup :-((

Wanted to hear what Rakhi have to say about all these ?? - "It was my idea, so I approached them. I have become famous due to reality shows. When I have become such a celebrity, why then should I have a quiet wedding? " ok ok, I can see your fuming face, just chill out dude ... On the whole, this program is one shit of a program which I request my readers NOT to watch, after watching and following some brilliant programs in Nat Geo like "Air Crash Investigation", "Wild Wild Animals", "Mega Builds" kind off stuffs, I just can’t stand this program even for 10 minutes. I am writing this just by watching the promotional video of this program, I don't know how the full program would be, I am sure the crap is going to be more and not less.