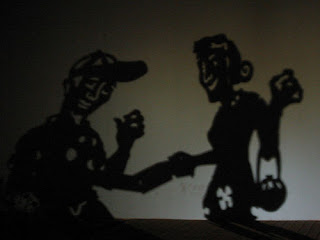 He is extremely restless and so as she, both of them have to get out of this and set out free like others, but circumstances did not allow them to do so. He has drunk enough and he literally is swimming in water, and she on the other hand is totally in pain and she has no words to express her anguish, but she knows that she has to undergo this period of her life, coz without him her life is next to nothing. Both of them have no choice other than waiting for this phase of their life to get over ...

He called her up one day and he did not speak much, she knows his mind much better than anyone else, she asked him what she can do for him to feel better, still he responded with silence. She said she will meet him in a week's time and asked him to be patient, but that does not seem to have convinced him, he felt as if kicking himself for all this mess, but he knows that it will hurt her so much so he decided to be quite and went to bed, he has drunk enough and he just could not stand becoz of that, but he somehow managed to hit his bed. He was thinking how he is going to handle the pressure which is staring at him, but he knows that it is a competitive world and somehow he has to win this battle.

She is nervous right from morning and the D-day has come and she has to face this in her life some day and that day is today, she has to break the silence and scream on top of her throat. He on the other hand had a wonderful swim that morning which made him feel fresh, he is ready to face the challenge, he is all ready to meet her and is pretty excited. This is the first time in his life he is going to see a girl in person who he has not met before in his life, though he has developed immense love and affection towards her even without seeing, he was nervous too. She is too worried to see her parents especially her dad, she is not ready to leave him and go, but she has to. It is a battle between love and deep love.

She somehow managed to escape when her dad did not notice her, she hoped that her mom will take care of him. She is all excited to meet him who would be her life forever and she is wondering if he will also have the same feeling. She is just minutes away to meet her love and life, she just could not control her excitement and she knows anything is worth missing to see him, she just screamed on top of her throat and there he came out with a mixture of blood & water, he was also screaming on top of his throat, everything is new to him, the light, the fan, the faces. He was too tired of swimming inside her tummy for almost 40 weeks. After having good bath, there he lands himself on the arms of the girl who he wanted to meet and he just said "I Love You Mom..." in a language only she can understand. It was all tears in her eyes and nothing to be translated in words.