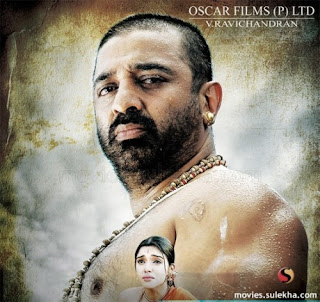 Its the day of the mega movie "Dasavathaaram", I just cant wait anymore to watch that magnum opus, there are all good reasons for me to watch that, not only Kamal Hassan is casting 10 different roles, but its my darling Asin's presence in that movie, we all know that she is a cute little talented bundle and I am sure she would have produced an absolute stunner performance in this movie, it may not be as equal to Kamal's performance, but it would certainly be a good one...
This is India's costliest movie ever produced and who else the industry can bet on such a huge investment none other than our one and only talented actor of India Mr. Kamal Hassan. Doing 10 roles in a movie is not an easy joke, he has changed is body language, voice, style, walk and every other thing to show distinct variance between the roles. Our superstar Mr. Rajinikanth has already given thumbs up for this movie after watching the preview and that one liner save Oscar productions a huge cost of advertising this movie, all Rajini fans will now be thronging the theater's to watch this stellar performance.
The story line is still unclear but media reports say that it’s a story that spans across 12 different centuries. The director Mr. K S Ravikumar has shown master class in this movie by showing variety in the way people lived many ages before, hast-off to the art director "Thotta" Tharani who has brought the 12th century inside the sets with a sheer sense of perfection. I am not that convinced by the choice of Himesh Reshmiya being the music director for this movie, but I hope he had done a good job, my obvious choice for such mega budgeted film would be our one and only maestro "Illayaraja".
Kamal looks stunning in this movie and he has maintained his physic very well, he does not need to show any 6 packs as like Sharukh Khan to draw the crowd, he does that by is acting. Some scenes in the trailer were simply stunning and it would push anyone to watch that movie in the theaters and no one would like to watch that in a DVD at home. Asin too looks cute in this move (as ever). I was shocked when I heard that Asin has signed a movie to act against Kamal Hassan just for the reason that Kamal will find a way to "Lip Lock" with my beauty, but thank GOD, there were no such scenes in this movie, and my darling saved :-))
Well, will be happy to pen the review of this movie when I get a chance to watch it. I am sure this is going to be a treat to watch.