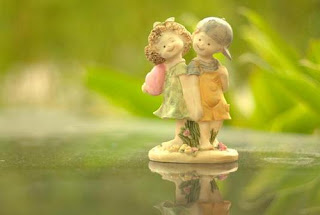 It all happened in a flash and Vasanthi could not recollect one instance where she can choose to say "Oh yaa that’s where things went wrong". Life could have been better for Vasanthi and Raghav and she still has the pride in her when all her friends told her that she is very lucky to have Raghav as her husband and yes, she too felt the same. Raghav and Vasanthi were happily married for 5 years now and if this statement has to be rephrased now, it would read as "Raghav and Vasanthi have been married for 5 years now" that quotient of "happiness" does not exist. Life does not give us reasons for most of its tantrums, and it is our stupidity to search for one and lose our peace of mind. Vasanthi still decided to search on for one reason which turned this relationship sour, "sour" is a lighter term to be used here, it is much worse than sour...
Raghav is a very soft spoken person, he first met Vasanthi in her college where he had been there for promoting one of his new designer clothing, when most of the girls in the college fell for that design, Vasanthi fell for that "designer". Raghav is a pretty handsome young man and he is also a man of few words, he hardly speaks, but when he speaks he makes complete sense. Vasanthi was waiting for an opportunity to meet Raghav, and luckily she met him by accident at a restaurant when he was having dinner with another girl, just because she saw him with another girl, she refused to approach him that day and say a "hi", yes, Vasanthi was possessive on Raghav even before she knowing him. Who does listen to their mind? Everyone listens to their heart, Vasanthi is no exception to that, he heart was searching for Raghav 24X7, she badly wanted to meet him and get introduced herself to him.

Opportunity knocks once and Vasanthi was aware of that, one fine day when she opened the paper, more than the headlines of a air plane crash, the news of "Wanted to be a trained fashion designer" ad, caught her eyes, and that was from the agency run by Raghav, before even the paper wala would have gone out of sight, Vasanthi called up that agency and enquired the details, of course she is not interested in getting to know the details of the course, she just want to spend time with her "crush". Vasanthi was called in for an interview at 10 AM and she was there by 9:30 AM, her heart's lub dub was audible for her ears and she was visibly tensed, while she was busy chewing one of her finger nails, her name was called and the voice which called her name was so appealing, oh yaa, when you are truly, deeply and madly in love, even a fart from that person would sound wonderful and smell aromatic.

Vasanthi was gazing at Raghav and it was like Raghav talking something and she could not hear anything, this is what we call "dumbstruck". Whatever Raghav explained Vasanthi just accepted and in no time she was selected for that course and Vasanthi's joy knew no bounds and to add sugar and cream on top, Raghav would be her teacher. Vasanthi excelled in that course and she became Raghav's favorite student and probably that is the time when Raghav started to think that it would be good to have Vasanthi as his life partner. On a chosen auspicious day, both of them exchanged their love and Raghav getting married to Vasanthi, did break the hearts of so many girls in the institute. There is a saying which says, it is always good to marry the person you love, than the person loving you, but in this case it is more than a perfect match, as both of them love each other.

The first crack on that porcelain jar happened when Raghav insisted on having a medical examination before marriage, of course not to test the virginity, but to test the potential to become a dad or mom. Vasanthi though agreed to that half-heartedly and also got a confirmation from Raghav that the outcome of the result will not alter the marriage decision. The tests were taken and then results were out, and as of now let it be a secret to the readers. Both of them got married a year later and life was running fine as well greased machinery. Vasanthi helped him in Raghav's new business and she understood the fact that this business of Raghav would demand working closely with good looking girls and she took that as part and parcel of his profession, but we cannot cheat our heart for long, though she pacified herself that all these were part of his profession, internally she just could not stand Raghav moving with girls and that irritation has put a comfortable chair inside her heart and sat there.

Vasanthi showed signs of that irritation getting out of her, when she rubbed an up-coming model who walked the ramp with clothing designed by Raghav; she gave her nasty remarks saying that this dress would have suited a DOG much better than her. Raghav came to know about this incident through some of his students and he made a mistake of slamming her for that behavior in front of her class and made her to apologize to that model. This caused a deep cut wound in Vasanthi's heart and she just could not get over it. The evil started sitting inside her head and playing tunes. Once Raghav got a very big order of designing wedding clothes for one of the leading actress and he put his blood heart and soul into that project as he know that it will be his entry into the cine world. Vasanthi though acted as if she is supporting him, decided to take revenge as she did not want Raghav to get any cine field offers, she felt that it will take Raghav away from her forever.

On the day of delivering the new dresses to that actor, Raghav stood frozen in front of his wardrobe to see his two months project was all in tangle and it was torn in every possible place it can, with tears rolling down his cheeks Raghav slide himself against the wall and Vasanthi smiled inside and shed few crocodile tears from her side, and to make the scene not so obvious, so managed to spot a big RAT in the room which was actually led inside by Vasanthi. Raghav stopped designing for a while, his name and reputation did have an impact after this incident. Then it got revived by the model who was once rubbed by Vasanthi, as she took him to a cine producer and got him an offer to design clothes for one of his new projects, Raghav had no words to thank her, instead he hugged her and gave her a kiss. The campfire inside Vasanthi blew like this Jaipur IOC fire and she just could not stand any further.

Vasanthi's way of talking changed, she started to question Raghav on where he is going, who he is meeting, what is his schedule for the day and stuffs like that, Raghav is not used to answer people, and he started telling lies to Vasanthi on those questions and once he felt that enough is enough, he shouted at Vasanthi from not poking her dirty nose in to his matters. Monthly fights became weekly fights and then daily fights. Raghav spent most of his time in the studios and avoided coming home, this irritated Vasanthi the most and she went to his studio one day and created a big scene out of his not coming home quite often. Vasanthi was more like a cook these days and she felt she would have had a kid to take her mind off such worries, but that is not the case now. Every second of her life was sucking and she hated Raghav from the bottom of her heart.

One fine morning she woke up Raghav and gave him a cup of coffee and a smile which Raghav felt was so unusual and Raghav requested her if she can go to his godown which is 100 kms away from the city in his new Honda City car to fetch some clothing materials, which she felt was unusual, before leaving his room she asked him to check the fridge as she has got a surprise for him. Raghav could not believe his ears, but he felt happy. Raghav forgetting to open the fridge set out to work and Vasanthi took the car out and set herself on a highway to the godown, around 12 in the noon, Raghav cell phone vibrated and the number flashing on his screen was showing the code of Andhra Pradesh, Raghav picked up the call and heard the news that Vasanthi met with an accident and died on the spot, they traced Raghav with the help of her cell phone where she has stored his name as "Darling Hubby".

Vasanthi's body was brought back after all the formalities and Raghav stepped into his crowded house to see Vasanthi lying still with two cotton rolls stuffed inside her nose, and head fully shaven and covered. Raghav went near the body and said "Tell me something dear, Ask me where I had gone today and who all I met today, please ask me Vasanthi, please ...." and unable to continue further he broke down. He went into their bedroom and recollected all the happier moments that he had with Vasanthi, he hugged the pillow Vasanthi used to use and slept with it for a while, suddenly he realized that Vasanthi told him that day morning that she has some surprise inside the fridge, he ran towards the fridge and opened it to see a lovely pine-apple pudding, made by Vasanthi for him and it has a cream lettering which read "With Love from V". Raghav broke down once again after seeing his love made his favorite dish, with tears rolling on his cheeks and nose drooling over his lips, he ate that complete pudding.

Both Vasanthi and Raghav's body were cremated the next day morning and the entire neighborhood was saddened by this sudden demise of this "wonderful couple". Two days later the same neighborhood got up to read a shocking news on the news papers which was released by the police after investigating the death of Vasanthi and Raghav, it was such that Raghav has purposely removed the brakes in his Honda City car to kill Vasanthi and Vasanthi has purposely poisoned the pudding to kill Raghav. This is what they call "Made for each other is it?”