Story Behind my Name ... 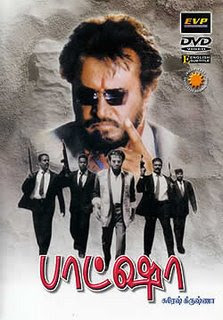 Lots of folks have asked me if I am a person who belong to that particular religion after seeing my name as "Bhaashaa" and I think still lots of folks think that I am from that religion. Just to clear some air here, I just wanted to put this post. I have been nick named as "Bhaashaa" since 1995 as that was the time when super star's movie "Bhaashaa" got released. Me a fanatic of Rajinikanth I actually started living as Bhaashaa for the rest of the college days, I used to walk like Rajini, I used to see like Rajini, and in short I lived like a person called Rajini. My college is very close to Satyam Theater in Chennai, and on the first day - first show of Bhaashaa movie, our gang was all ready to welcome our thalaivar's new movie flick and this is how the scene unfolded that day 14 years back ...

Around 43 members gathered outside Satyam theater and me being a known person to that manager in Satyam, I was given a red carpet welcome to get the first 50 tickets for Bhaashaa in Satyam and at that point in time I was the hero in my gang, as I told my readers before, Satish underwent so many changes in him, being a nonsense blabber to a very quite child to a crowd puller to a stage comedian, well, it’s a real see-saw ride my life is and today too GOD has blessed me to be a crowd puller, and thanks a ton for those golden days I have spent in my college, that's when I realized that I too have some sense of humor and that led me all the way to get the "Best Humorist Award" for 4 consecutive years in the competition conducted by "The Humor Club International" and I was blessed to receive award from the jaambavan's of humor like, Nagesh, Mouli, Kaathaadi Ramamoorthi, Sve Sheker, and Crazy Mohan. Ok ok ... enough of "self-trumpeting you idiot, don bore your readers like this ..."

So we gave a complete milk abhishekam to our thalaivar's cut out and that was broadcasted across all news channels in tamilnadu and for those who would have thought that time "Are these maniac's or fools or stupid’s" I was one among them. The first opening song "Naa autokaaran autokaaran ..." where our thalaivar comes into the frame by breaking a pumpkin on his head, we went literally ballistic and were screaming on top of our throat "Thalaivaaaaaaaaa ... Thalaivaaaaaaaaaaaa" the very good thing in that show is, there were no girls in that theater and generally girls will not come for a first day first show, that too for a Rajini movie. So we removed our shirts and started running towards the screen, and lit camphor to our demi-god and came back to our seats. One thing I have to mention here is, next to the movie, our gang was the next entertainment, everyone just loved our actions, we were never a VULGAR unit, so we were decent in whatever we did and made sure that we don’t disturb others.

I still remember the scene where Anandraj ties Rajinikanth to a pole and beats him, at that time we were all damn angry and one of my friend broke the Pepsi bottle in his hand after seeing that, I was fuming in anger and I just wanted to kill Anandraj there, and the director Suresh Krishna gave all of us a welcome treat by keeping another scene where thalaivar Rajini trashes Anandraj in that same pole, you guys won't believe, our blood, nerves everything reenergized after seeing that scene, we were thumping as if INDIA won the world cup in Cricket against Pakistan. The flashback sequence in that film was simply awesome and another scene where Rajini goes to the college and gets his sister a doctor seat and that college principal sweating and shitting bricks, man, man, man ... Satish was not in this world at that time, I seriously wished I could have died then and there, that one movie of Rajini is all that we want till he retires from the cine industry.

At the end of the movie we all went to the stage with a pumpkin, we lit camphor on that ... we broke that there, we danced near the screen for "Autokaaran" song which they played at the end, that was the first and last time I danced in my life. While coming out we all had a terrible throat, we all could barely speak, there was this SUN TV reporter who asked me how the movie was, with a broken voice I said "Thalaivaa nee vaazhga, Indha oru padam podhum enga thalaivaroda pera sollarathuku" and that got broadcasted the same week in Sun TV. The next day for college, I went with a Kaakhi pant and Kaakhi shirt, I was metamorphosed to Maanikam (Rajini's name in that movie) and when someone rubs me, I turn as Bhaashaa ;-)). I was good in imitating that action of Rajini in that movie where he whips his right hand fore finger and that goes with an "Ushhhh" sound, I do that with ease and from then everyone in the college know me as Bhaashaa and not as Satish, and still most of my college friends call me by that name.

I re-lived those moments in my memory by watching that movie in my DVD and I told myself that "Satish, you can never go back to college days" the one period in my life which I wanted to go back and re-live once again, even if I have to clear my mathematics arrear once again.