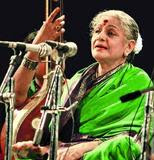 M S Subbulakshmi, shortly accronymned as MS. I am not such a great follower of carnatic music, even though my grand fatehr is a famous musician who has been a GURU for well known singers like T R Mahalingam, Maharajapuram Santhanam, Soolamangalam Sisters etc, etc, but somewhat i was attracted by this great person, i am still figuring out what's that magnetism that attracted me in her. I started collecting her cine songs as well as her bhajans, trust me, her voice was mesmerizing. Just listen to her "Kurai ondrum illa marai moorthy kanna ..." song in a music system, you will be taken to a new world.
I should admit the fact that i was attracted towards that genius not for her songs, but for her looks. In tamil we would call "Pazhutha Sumangali", this term will be used for a women who lives with her husband for decades and she is a perfect example for that. Her beautiful kunkum on the forehead, her 2 sided nose studs, that wonderful silk saree she wores, a nice flower garland on her head, when you look at her in such an attire, automatically your hands will unite and you feel like seeing GOD in front of you. She had that tejus on her face which lasted till she died.
Her voice is GOD's gift and she herself is a GOD's gift to us. I still remember the day she died (11th December 2004), it was a very dry season and you cannot expect even a drop of rain, but on the day she died, even the nature cired, all of a sudden it started to pour in Chennai and it was something great, i think even GOD could not control his emotions, hence he cried. Her absence has created a big void in the world CARNATIC music and i dont think anyone can fill in that space. I just thought of remembering her on her 3rd death anniversary, and hence i dedicate this section to that great LEGEND